Writing a shopping list, pushing a trolley though supermarket aisles and collecting groceries might seem like mundane tasks most of us do week in, week out.

But they aren’t routine for many people in our community, particularly those struggling to find work against the backdrop of COVID-19 restrictions in Victoria.

Take for example Caryn Hearsch, who has been jobless since 2017 and hasn’t done a substantial supermarket food shop in around seven years.

“I get milk and bread occasionally. I have a friend that brings me sometimes a bit of other bits and pieces,” the 63-year-old explains.

“But to be able to like plan a shopping list and push a trolley around all the aisles – I wouldn’t know where to start now.”

It’s a struggle for Caryn to pay the mortgage on her Hoppers Crossing home and buy food and medicine for various medical conditions, including depression and high blood pressure. The grandmother of two used to try to earn money by selling items at a trash and treasure market in Geelong but stopped when the pandemic hit, resorting to listing some of her possessions for sale online.

“I don’t have any other option, I have to rely on the pittance that the (federal) government gives me and just pray to God that I can keep paying my mortgage, which is my priority, and just try and keep up with the other bills as best I can,” she says.

“No one should have to be making choices between food and bills, medication and bills. But we are.

“I was brought up with (the idea) Australia’s the lucky country. Where has it gone?”

Caryn has applied for more than 700 jobs over the past eight years, after seriously injuring herself when she slipped on a freshly washed floor in 2012. She had to have reconstructive surgery on both shoulders after her accident.

“After my accident … my life just really ended,” she says.

Before her injury she worked as a medical secretary for 49 years at the Peter MacCallum Cancer Centre and the Melbourne Brain Centre at the Royal Melbourne Hospital.

A few years after her accident, Caryn retrained as a teaching assistant and managed to secure one six-month contract and one six-week stint at a school, but hasn’t worked since her last contract ended in 2017.

“I just feel I’m, I’m worthless. I am not contributing to the world, I’m not bringing an income in,” Caryn says.

“Life’s pretty crap at the moment to be honest, only because not working has had such a huge, huge impact on my mental health.”

“to be able to like plan a shopping list and push a trolley around all the aisles – I wouldn’t know where to start now.”

The pandemic has compounded Caryn’s mental health struggles and she recently contemplated taking her own life.

Caryn says her best friend Lynne, who lives in Queensland, is like a sister to her. She was hoping to try and visit Lynne this year but that plan is now off the agenda due to border closures and other COVID-19 restrictions.

Caryn stays in regular phone and video contact with her daughter Emma, who is based in Romsey, some 80 kilometres away, and her grandchildren – Aurora, who is nearly eight, and Cody, who turns six in August.

She says it’s heartbreaking not being able to see her family, particularly for Cody’s birthday, and she’s worried about whether she’ll be able to see them again at all.

“I’m here, she and the grandchildren are up there. The way this world is like, nobody knows what’s going to happen tomorrow.” 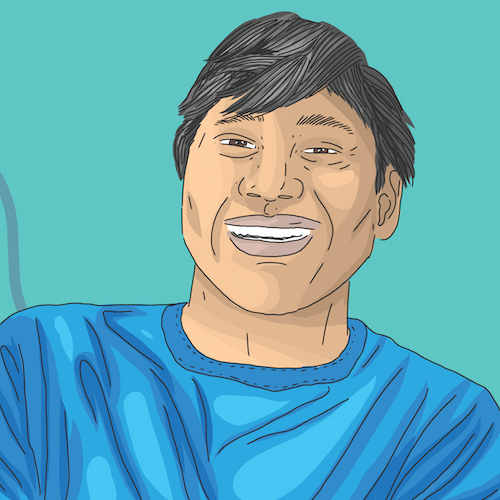 Next: ‘A bitter pill to swallow’: coping with racism and the virus